The first year I worked with the United States Forest Service, our project consisted of a fuel break on Grindstone Mesa, south of Ruidoso. The year was 1978! After the Cree Fire in the year 2000, we had an increase in funding for thinning private property AND public lands. The mindset was changed with the realization of what a fire could do. Much of this money was used properly, and a lot of acreage concerning this project was treated. But, a lot was diverted away from the original plan of a fuel break west of town.

I would like to see the focus of future funds, on clearing a buffer south and west of Ruidoso, in order to take a stand against any fire coming off the Tribal Lands. What we need from the Mescaleros, is to burn or thin fuels pockets where torching can send embers for a mile or two and cross our control line.

Fire Line or Control Line, is a trail, road or bulldozer path that is cleared of all flammable material, leaving mineral soil and rocks. It lies in the fuel break and is the edge of the fire that robs the fuel of the oncoming fire. The Ruidoso project, would have 8.5 miles of control line, that would start from Carrizo Canyon Rd. at the Rainbow Lakes area, and follow the ridge up to Grindstone Mesa, southwest of Grindstone Lake. From there the fuel break, turns north and follows the boundary of Mescalero Land, until it drops down into the Ski Run Road, also known as Upper Eagle Creek. (Just before Eagle Lakes Campground)

By thinning intensely along the actual control line, it can be used by fire crews to burn back into a wind driven fire headed towards them and town. These crews then use the “black” as safety zone immediately after they set fire to it. You want fire to carry and burn everything completely because the “black” is considered safe from fire. Everything that burns must go out quickly, and grass is ideal. We want no heavy fuels next to the Control Line! The pockets of heavy fuel that lead to severe torching will be the concern. Fire Engines and structure crews would work the structure side, chasing any spot fires starting on the wrong side of the control line, where homes are.

Each season, if firefighters & people are going to trust this buffer as their line of defense, it will need to be inspected. All fuel breaks needs to be maintained if they are going to be effective! Heavy interior fuels in canyons aligned with the wind, will need to be thinned and burned. The Mescalero Apaches, would probably gladly thin their side; if we offered to pay them. We will need to weed eat critical areas, and maintain the roads used to drive personnel to strategic high points along this control line. From these points, burners will go both directions DOWNHILL. This is because fire burns uphill better than down hill. (so don’t start burning at the bottom) Several burners will work side by side burning in strips until it’s wide enough to be a buffer that the fire can’t cross. With several groups working together simultaneously the whole burn can be done in an hour or so. The ONLY way to stop a fire is if somebody is there to burn! Otherwise, a fire will just run through your break and keep going.

In the event of an actual fire, firemen would assess their assets and weather conditions and make a go or no-go decision as to whether they feel safe doing a burn. The actual plan should have been gone over many times, under different scenarios, and everybody should know their place in the operation. They need good communications and lookouts to make a coordinated burn happen. Everybody should have an Escape Route to a Safety Zone available to them at all times.

The city/county is going to have to hire a crew of qualified firefighters to work year round. They could hire about 10 full time people, that have the ability to do the burnout and thinning, and supervise the maintenance of the break. The maintenance of the break could be shared by people wanting or having to do community service. It could be done by a program to give youth work skills and a little spending money. These fire personnel would be a great mentor to kids learning to work. What I’m saying is, I think the break could be maintained by the community, and made very accessible to the public to use for picnicking, hiking and possibly even Mt. Bikes.

The USFS land south of Grindstone Lake, the land between Upper Canyon and Cedar Creek, and the USFS land between Cedar Creek and the Ski Run Road, needs to be accessible and thinned. These chunks of land are on the urban side of the fuel break and should have access roads, trees logged or thinned, even grazed. Should a spot fire make it into these forest lands, we need to be able to drive equipment to the fire to fight it. We should also develop Safety Zones in these areas, which would be another plus for the crews burning out.

Any trees suitable for making lumber or wood chips should be removed by commercial entities. It doesn’t make sense to waste valuable resources! Any big trees that are inaccessible to logging should be left or thinned by hand. The goal here is to create a healthy forest where it’s safe to take a stand against an oncoming fire.

As I said at the beginning, this project was started in the late 1970s, and it’s still not finished. Much of the thinning money has been spent on private property, and that money well spent! But to actually stop a fire we need to finish a project started almost 35 years ago, that fell apart over the years. Most of the work has been done already; so!

It’s time to make it a reality. 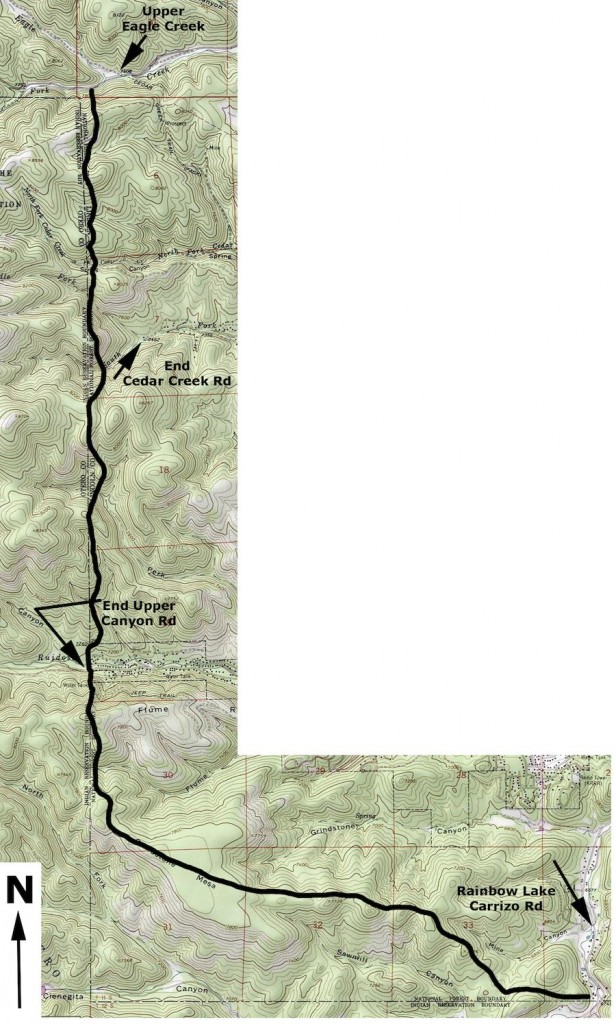 In the event of a wildland fire coming off the Mescalero Apache Land, Ruidoso’s best defense is to have a fuel break & control line south & west of town

To stop an approaching fire, firemen would burn along this line, starting at the tops of the hills and going downhill. Several groups doing this in coordination with each other can cover miles of line in a very short time. Spot fires across the line are always expected, so all other fire personnel should be patrolling for spots in the “green”. A decision needs to be made; do we have enough resources to carry this out? The whole response needs to be coordinated with good communications Escape Routes and Safety Zones for people and equipment.

Vehicle access to strategic points on the line, are necessary for a fast response and the ability to effectively control spot fires that start. Money for thinning is best used to treat the land south of Grindstone Lake, the land west of Smokey Bear Ranger Station, and the land west of Upper Gavilan Canyon (Blood Ranch). This will provide emergency access to ANY fire in those areas.